From Heraldry of the World
Your site history : Alfonso De Jesús Olivas
Jump to navigation Jump to search 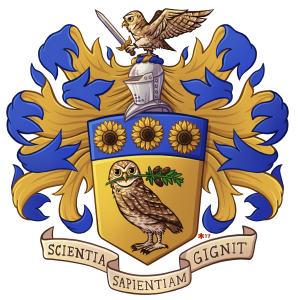 Arms: Or, a western burrowing owl close guardant holding in his beak a sprig of olive fructed thrice all Proper; on a chief Azure three sunflowers Proper

Crest: A western burrowing owl rising with wings addorsed and elevated, and grasping in his sinister talon a sword all Proper

Arms: The golden shield cut by the blue chief represents my birthplace. The golden field is a depiction of golden desert sand, while the chief shows a river to the north. My birthplace is in a desert south of a river (Ciudad Juárez, Chihuahua).

On the chief, there are three sunflowers. The sunflower represents my mother, V. Aguirre, whose favorite flower was the sunflower for its tendency to follow the sun. She would decorate our home with sunflowers everywhere. Her philosophy was to look at the sunny or positive side of life, and saw the sunflower as an adequate symbol to represent that idea. The number of sunflowers represents my three siblings who also carry the Aguirre surname as well as the Olivas surname.

Held by the beak of an owl, there is a sprig of olive bearing three fruits. The sprig of olive is a reminder that peace and goodwill are the most important things in life and must be guarded. V. Olivas, my father, is well represented by this due to the serenity and gentleness that characterizes him. Our surname of Olivas is also canted with this charge. Additionally, the number of olives represents my three siblings who also carry the Olivas surname, but do not carry the Aguirre surname.

The owl (A. c. hypugæa) is a representation of myself, the armiger. Since ancient times, the owl has been a symbol of knowledge, wisdom, and temperance in cultures all across the globe. These are qualities I aspire to obtain as I grow and learn. Knowledge, for it has been a special priority in my family, as both of my parents encouraged their children to educate themselves as much as possible; Wisdom, to discern good decisions from poor ones, and Temperance to choose the best time to act upon those decisions. This specific species of owl can be found in my native area, and has lived in close proximity to my homes on both sides of the Mexican-American border.

Crest: The same owl from the shield is now carrying a sword in its left talon, as I am left-handed. This symbolises that even though peace is preferred, I should be ready to stand and defend myself should the need arise. The sword also represents my first given name, Alfonso. Of Hispanic-Visigoth origin, the accepted etymology is "noble and battle-ready".

Assumed in 2015; designed by the armiger and Mr. Steven A. Harris