From Heraldry of the World
Your site history : Diamond Valley
Jump to navigation Jump to search 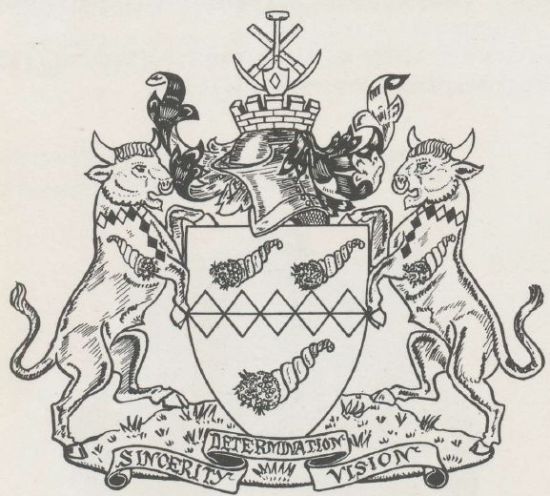 Arms : Vert, five Lozenges conjoined in fess, alternately per fess Or and Argent and per fess Argent and Or, between three Cornucopias Or, the fruit proper.
Crest : Out of a Mural Crown Or, in front of two Pick Axes in saltire, a Spade palewise Gules, the blade charged with a Lozenge Argent.
Supporters : On either side a Bull Or, armed, unguled, and charged on the shoulder with a Cornucopia facing inwards Gules, collared lozengy Argent and Gules, edged and attached thereto a string of Lozenges Gules.
Motto: 'Sincerity, Determination, Vision'.

The diamonds set on a field of green symbolize the name of the Shire, whilst the cornucopias, or horns of plenty, indicate the orchard properties which were formerly numerous in the district.

The Crest of a spade and picks remind us of the early mining activities in the area, the mural crown on which they rest being the emblem of local government.

The Supporters allude to a legendary bullock called 'Diamond' which some early settlers assert was responsible for the naming of the area. They have been differenced by the collar and chain, with their reference to the Shire name, and by the red horns and hoofs.

The initial letters of the Motto are those of the Shire of Diamond Valley.

This design was made in February 1966 as a proposal, with the same basic design: