Diocese of Southwell and Nottingham

From Heraldry of the World
Revision as of 14:06, 25 May 2019 by Marcusk (talk | contribs) (→‎Origin/meaning)
(diff) ← Older revision | Latest revision (diff) | Newer revision → (diff)
Your site history : Diocese of Southwell and Nottingham
Jump to navigation Jump to search

DIOCESE OF SOUTHWELL AND NOTTINGHAM (until 2005 Diocese of Southwell) 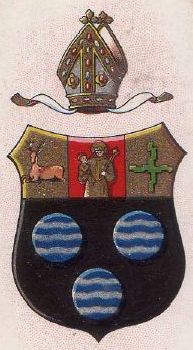 Sable, three fountains proper; a chief Or, thereon a pale azure charged with a representation of the Virgin Mary seated bearing the Infant Christ Or, between on the dexter side a stag lodged proper and on the sinister two staves raguly crossed vert.