From Heraldry of the World
Your site history : Douglas Michael Dehn
Jump to navigation Jump to search 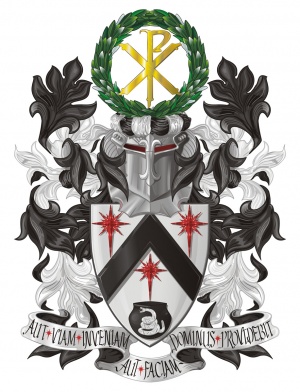 Arms: Argent, a chevron Sable between three star-crosses Gules and in base a cauldron Sable, branded with a serpent coiled erect Argent.


Crest: A monogram Chi-Rho Or, within a chaplet of laurel Vert. 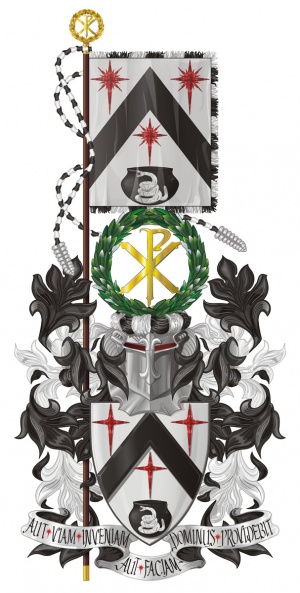 The armiger’s maternal grandfather was a first generation US citizen of parents who had emigrated from Germany with the surname Dehn. The most common search for heraldic images for the name Dehn results in armorial bearings with a Germanic origin (Or, a cauldron Sable and in chief a row of three stars Argent). As no direct connection can be established between the armiger and the historical arms described above for the surname Dehn, the armiger decided to create his own. Wanting to pay tribute to the historic arms associated with the surname Dehn while creating arms unique to himself, the armiger decided to combined elements from the historic arms of Dehn with those of the historic arms associated with his wife’s maiden name of Damron (Argent, between three roundels Gules, a chevron Sable).

The colour scheme for the new shield was adopted from the traditional arms associated with the name Damron.

The chevron, in addition to being an element of the historic arms associated with the name Damron, is believed by the armiger to be classically associated with protection or military service; it serves as a reminder that a man is the protector of his family and as a reminder of the sacrifice of those who serve in the military. While the armiger never served in the military, many of his family members have.

The armiger chose to keep the cauldron because it is the historical symbol associated with the surname Dehn and represents hospitality and support of one’s family.

The serpent on the cauldron reflects that illustrated on the Gadsden Flag (U.S. Navy, and U.S. Marine Corps) and, to the armiger, symbolizes both knowledge and defiance. The snake was the creature that tempted Eve into eating the forbidden fruit of the knowledge of good and evil. The Gadsden snake symbolizes American patriotism, disagreement with the overbearing of government and a support of civil liberties.

The stars are intended to resemble the classic imagery associated with the star of Bethlehem (The star that led the wise men to the birthplace of Christ). The armiger also considered the three red stars significant because there were three wise men that sought and found Christ at his birth. The Chi Rho, featured on the crest, is an early Christi Monogramma formed by superimposing the first two capital letters Chi and Rho of the Greek word for Christ. The wreath surrounding the Chi Rho symbolizes triumph, specifically, the triumph of Jesus Christ over the grave and death.

The Latin motto, "Aut Viam Inveniam Aut Faciam - Dominus Providebit", translates into English as "I shall either find a way or make one - The Lord will provide." This motto illustrates the armiger’s determination to find solutions to any problem he encounters and his faith in the Lord, Jesus Christ, to provide the means to obtain anything he truly needs.