From Heraldry of the World
Your site history : Edigheim
Jump to navigation Jump to search 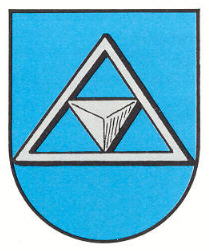 The arms are based on the oldest seal of the village, dating from 1661. The symbol itself is probably derived from the old arms of the city of Frankenthal, which showed a triangle or diamond.