From Heraldry of the World
Your site history : Eichstätt (kreis)
Jump to navigation Jump to search 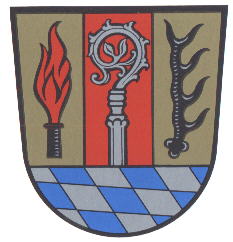 The new arms show still the crosier from the old arms (see below). The deer's head is replaced by the antler, and the torch is added. The torch symbolises the industrial area around Ingolstadt in the district. The base is also added and shows the diamonds of the arms of Bayern. A large part of the new district belongs to Bayern already for many centuries.

The district belonged until 1305 for the largest part to the Counts of Hirschberg. The deer's head is taken as a symbol for these Counts (Hirch-deer). The crosier symbolises the bishops of Eichstätt, the successors of the Counts of Hirschberg. The area belonged to the bishops until 1803 when it became part of Bayern. In 1817 King Max Joseph of Bayern created the principality of Leuchtenburg and gave it to his son in law, Eugen Beauharnais, nephew of Napoleon of France. The principality, to which the district belonged, existed until 1852. The eagle is derived from the eagle of Napoleon and his dynasty.