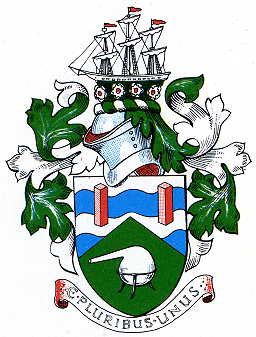 Arms : Per chevron barry wavy of four Argent and Azure, and Vert, in chief two steel ingots each palewise Gules and in base a retort in its stand Proper.
Crest : On a wreath Argent and Vert issuant from a circlet of roses Argent barbed and seeded Proper a three masted sailing ship sails furled also Proper, pennons flying Gules.
Motto: 'E PLURIBUS UNUS' - One out of many

The arms were officially granted on December 5, 1955.

The white roses beneath the ship represent Yorkshire.