From Heraldry of the World
Your site history : Kiribati
Jump to navigation Jump to search

Kiribati was formally divided into districts until its independence. The country is now divided into three island groups which have no administrative function, including a group which unites the Line Islands and the Phoenix Islands.

The original districts used to be:

The island groups include:

As far as I know, none of these uses arms. 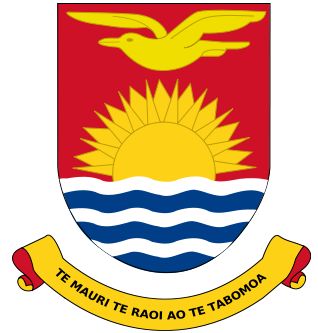 The coat of arms of Kiribati is nearly the same that the one given to Gilbert & Ellice Islands Colony in 1937 (£25 were paid by the Colony for that!), image shown below. 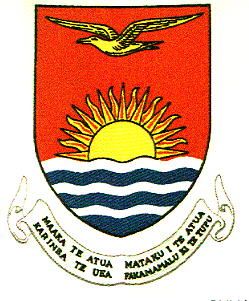 The motto on the old arms is written both in Gilbertese and Tuvaluan (the polynesian language of Ellice Islands, now Tuvalu). When the Ellice Islands became independent, the Gilberts kept the same coat of arms with a new motto (only in Gilbertese): 'Te Mauri, Te Raoi ao Te Tabomoa' meas 'Health, Peace and Prosperity' with 'Mauri' used as main greetings (like Hello).

The Gilberts became independent as Kiribati on 12 July 1979 and the arms were adopted as national arms at the same day.

The arms show a yellow frigatebird over a rising sun on a red background. The frigate bird is a common animal on the islands. The base shows the Pacific Ocean with three silver stripes for each of the island groups.
The 17 rays of the sun represent the 16 Gilbert Islands and Banaba (former Ocean Island).