From Heraldry of the World
Your site history : Leonard Dean Henderson
Jump to navigation Jump to search 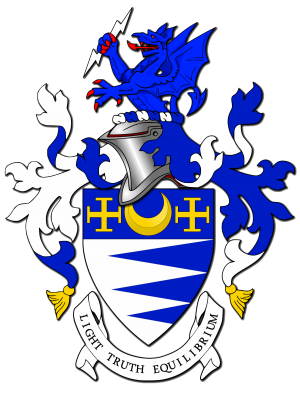 Arms: Argent three piles issuing from sinister Azure, on a chief Azure a crescent between two crosses potent Or.

Crest: On a wreath Argent and Azure a demi-dragon Azure armed and langued Gules grasping in the dexter claws a lightning bolt Argent.

The blue on the shield is emblematic of the armiger's 20 year career in the US Air Force. The crescent is a nod to the armiger's Scottish paternal name of Henderson. The crosses is a nod to his status within Scottish Rite of Freemasonry. The Dragon symbolizes the warrior's time in the Far east The lightning bolt symbolizes electrical power and his time in the USAF Civil Engineers