From Heraldry of the World
Your site history : Lingenfeld
Jump to navigation Jump to search 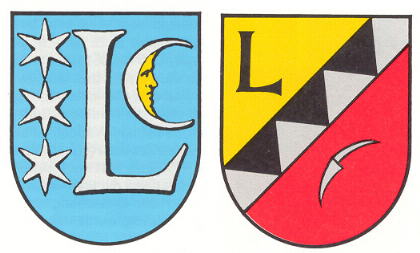 The arms were granted in 1841 by King Ludwig I of Bayern, and were based on elements from the two historical seals of the town. In 1968 the arms were slightly changed, the crescent in the lower half was replaced by a plough iron.

The letter L is the town's initial. The bend is derived from the arms of the Lords of Lengenfeld, who historically ruled the village. Together with a crescent these elements were derived from 18th century seals. Later, an older seal was discovered, showing a plough iron. This was most likely a (common) agricultural symbol. It has added in 1968 is a rather unusual shape, resembling the replaced crescent.