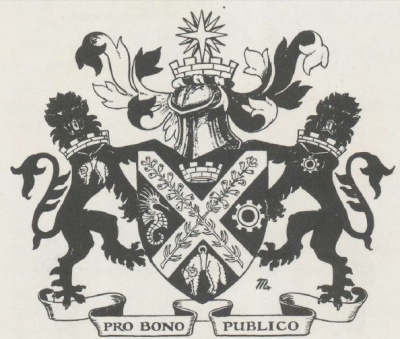 Arms : Azure, on a Saltire Argent between in chief a Mural Crown, in the dexter flank a Hippo­ campus contournee, in the sinister a Cog-wheel, and in base a Fleece Or, banded Gules, two sprigs of Heath in saltire Gules, slipped and leaved Vert.
Crest : Out of a Mural Crown Gules, a Rose of the Winds of sixteen points Gules, Sable, and Argent.
Supporters : On either side a Lion guardant Gules, each gorged with a Mural Crown, pendent from the dexter by a chain a Fleece, and from the sinister a Cogwheel Or.
Motto: 'Pro Bono Publico'.

The silver cross on the blue shield carries two sprigs of Pink Heath, official emblem of the State of Victoria. In the principal quarter is a gold mural crown, heraldic symbol of local government; in the other quarters, also in gold, are a hippocampus (seahorse) representing Victoria's important coast­line, a cogwheel representing industry, and a fleece representing primary industry.

On the red mural crown in the crest is a 16-pointed mariner's compass with points in red, black, and silver, symbolic of the guiding role of the Municipal Association in local government affairs.

The shield is supported on each flank by a red lion. Both lions have collars of gold mural crowns and suspended on each collar is a golden fleece and a golden cogwheel respectively. The supporters are also symbolic of the Association's role as a guardian of local government.