Difference between revisions of "Pembroke (Wales)"

From Heraldry of the World
Your site history : Pembroke (Wales)
Jump to navigation Jump to search 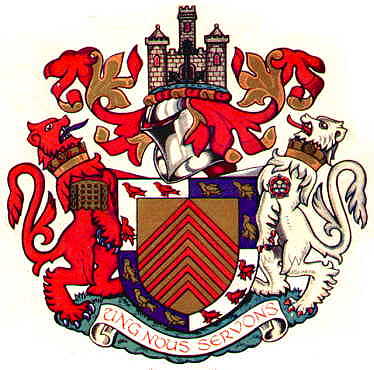 Arms : Or six Chevronels Gules within a Bordure quarterly Argent and Azure charged with twelve Martlets those on the Argent of the second and those on the Azure of the field.
Crest : On a Wreath of the Colours in front of a Castle with three Towers the outer two steepled proper an Anchor Sable.
Supporters : On the dexter side a Lion Gules charged on the shoul­der with a Portcullis chained Or and on the sinister side a Lion Argent charged on the shoulder with a Tudor Rose each gorged with a Naval Crown Gold.
Motto: 'UNG NOUS SERVONS' - We serve as one

The arms were officially granted on September 12, 1950 and transferred to the town council on ?.

The red lion is derived from the arms of William the Marshal, who was Earl of Pembroke 1199-1219, and was succeeded in the earldom by his five sons. The white lion is from the heraldry of the Herbert family, who have held the Earldom of Pembroke since 1468. The naval crowns refer to Pembroke Dock, with particular reference to the former Royal Naval Dockyard, and the portcullis and rose are badges of King Henry VII, who was born at Pembroke Castle in 1457.

The motto is a variation of that of the Herbert Earls of Pembroke, Ung je serviray.