From Heraldry of the World
Your site history : Queensferry High School
Jump to navigation Jump to search 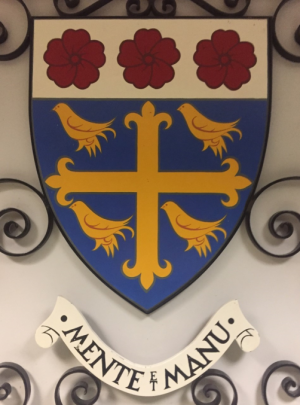 Arms: Azure, a cross flory between four martlets Or, on a chief Argent three primroses Gules.

The arms were officially granted on 16th February 1970.

The cross and martlets are the arms attributed to Edward the Confessor. From his house came Queen Margaret, who founded the ferry that gave the burgh of Queensferry its name. Queensferry High School was founded on the 900th anniversary of her arrival in Scotland, in 1970. The lands of Dalmeny, on which the school was built, are the domain of the Primrose family, Earls of Rosebery, and from their arms were taken the three primroses. The motto means "With mind and hand".

Literature: Thank you to Z. W. Eisler for providing the information taken from here and the images (own photos).