From Heraldry of the World
Your site history : Senegal
Jump to navigation Jump to search 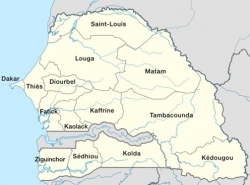 Senegal is subdivided into 14 regions. The country is further subdivided by 45 Départements, 103 Arrondissements (neither of which have administrative function) and by Collectivités Locales (municipalities). Some cities are further divided into city-arrondissements, or boroughs.

As far as I know none of these uses heraldic arms.