From Heraldry of the World
Your site history : Special Troops Battalion, 82nd Airborne Division, US Army
Jump to navigation Jump to search 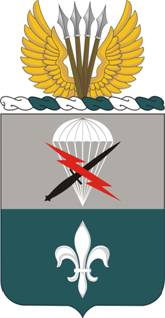 Distinctive Unit Ingsignia, Description: A Silver color metal and enamel device 1 1/8 inches (2.86 cm) in height overall blazoned as follows: Per fess Argent (Silver Gray) and Celeste (Teal Blue), in chief a deployed parachute Or surmounted by a dagger, point up and a lightning bolt of the like, in saltire; in base a fleur-de-lis of the first. Attached below the shield a Black scroll inscribed "COURAGE, COMMITMENT" in Silver.

The Parachute symbolises the Airborne Mission of the Battalion and Division. The Lightning Bolt suggets speed and shock capability of the Division. The Dagger signifies the Division's strength and power. The Fleur-de-lis symbolises the Unit's activation and service in France during World War II. The four Spears in the Crest allude to the Unit's campaign participation during world War II: Naples-Foggia, Rome-Arno, Rhineland and Central Europe. The Wings denote the Battalion's multifunctional nature.

The Coat of Arms and Distinctive Unit Insignia, was both approved on 1 August 2006.

Literature: Images and Information form The Institute of Heraldry, US Army.