From Heraldry of the World
Your site history : Stollwerck series
Jump to navigation Jump to search 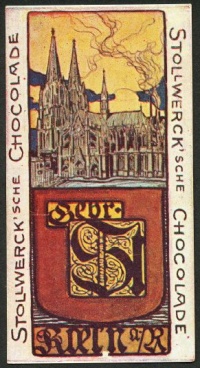 Stollwerck was the first German company that issued trade cards. The first cards were added to the packages in 1840, the last in the 1960s. In 1897 albums were issued for the different series. Each series had a theme and consisted of 6 cards. The albums became very popular and over 100.000 were sold, together with 50 million cards, all between 1897-1903. The turnover of the company doubled.

The two only series with a heraldic theme are number 71, showing 5 coats of arms of States and one logo and series 123 showing arms of cities and states.