From Heraldry of the World
Your site history : Turkey
Jump to navigation Jump to search

Turkey is subdivided into 81 provinces for administrative purposes. Each province is divided into districts, for a total of 923 districts.

Turkey does not have a heraldic tradition. I have no information on the use of any heraldic arms in the country.

Since the creation of the Turkish State in 1923 the country has not used arms, only the above emblem.

The predecessor, the Ottoman Empire also did not use proper heraldic arms, but used the composition below, which was officially adopted on April 17, 1882. 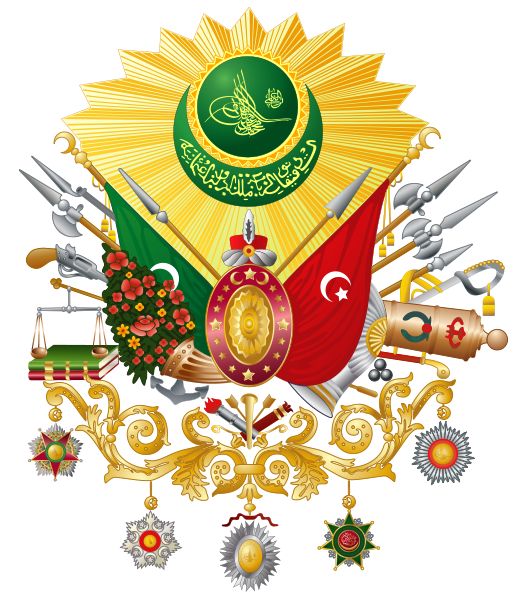 The composition shows the tughra, the symbol of the Sultans. It is surrounded by two flags: the red flag of the Ottoman dynasty with a star and crescent, and the green flag of the Islamic caliph, largely obscured by a cornucopia.

Behind the flags are a number of spears and other weapons, scales and a book for justice as well as an anchor and torch. The sun behind it all shows the name of the country and a green crescent.

Sometimes, in rolls of arms and stamps, only the name of the country was used:

The use in collector's items has shown different variations of the arms with crescent and star, but the Ottoman arms I have never encountered: