From Heraldry of the World
Your site history : Wakefield
Jump to navigation Jump to search 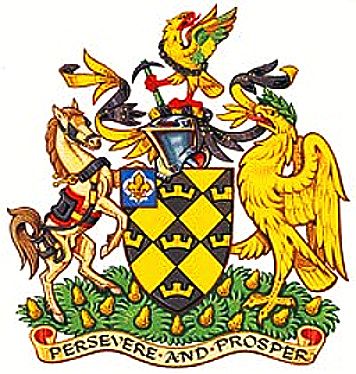 Arms : Lozengy Or and Sable each Lozenge Sable charged with a Mural Crown Or a Canton Azure charged with a Fleur-de-Lys Or fimbriated Ermine.
Crest : On a Wreath of the Colours an eagle reguardant Or the undersides of the wings lozengy Or and Vert with a chain around its body and holding in the dexter claw a Miner's Pickaxe proper.
Supporters: On the dexter a Dray Horse with Pack Saddle and Harness proper and on the sinister an Eagle Or crowned with a Wreath of Laurel proper all on a Compartment of a Grassy Mount strewn with thirteen Acorns Or.
Motto: Persevere and prosper

The arms were officially granted in 1990.

The Shield consists of many divisions, which fit closely together to make a unified design. The black diamonds allude to coal as a dominant factor in addition to which there are many other activities symbolised by the gold coloured divisions and also representing the wealth, both moral and material, of the area. Against this background, mural crowns signify that Wakefield is the centre of public administration for the whole area. The castellation of the crowns may also allude to the many well-known castles in the District. The historic arms of the former City of Wakefield are included on the shield as a free quarter.

The Crest shows an eagle which is reguardant, i.e. on the alert, with a chain around its body relating to the engineering aspect of the area, and holding a miner's axe. The undersides of the wings are lozengy Or and Vert in reference to the wealth produced by new ideas and experiment in many fields of endeavour. The Crest stands upon and forms the top of, one of the earliest forms of Helm representing Local Government Authorities.

The Supporters comprise to the dexter a dray horse with pack saddle and harness alluding not only to the country areas, but also historically to its excellent means of communication; and to the sinister a golden eagle in reference to the Roman aspects of the area, especially Castleford. Beneath the Supporters is a compartment consisting of a grassy mount of field (as a pun on Wakefield) upon which thirteen golden acorns represent the thirteen areas brought together to form the new District.

At the foot of the Coat of Arms is a scroll incorporating the motto "Persevere and Prosper". 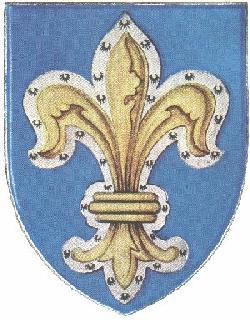 Azure a Fleur-de-Lys Or fimbriated Ermine.

The arms were officially granted on March 3, 1932, but have been in use for a much longer time.

The Arms used by the city of Wakefield have been for at least five centuries "Azure, a fleur-de-lis or" (a golden lily on a blue shield). These arms appear on a carved wooden boss on the Cathedral roof, which may be dated not later than 1470. Single fleur-de-lis appear on the frieze of the choir screen (1635) and also on the badge of the Wakefield Waits (1688).

The Manor of Wakefield was bestowed by Edward III on his fifth son, Edmund of Langley, Duke of York, in 1347, who bore the Royal Arms of France and England. These arms thus became on all public documents the arms of Wakefield, superseding the "Checky or and azure" shield of the de Warenne family, the former Lords of the Manor. It would seem that a kind of abridgement of these arms subsequently ensued, one golden fleur-de-lis only on an azure shield being adopted.

Literature : Information provided by the Council