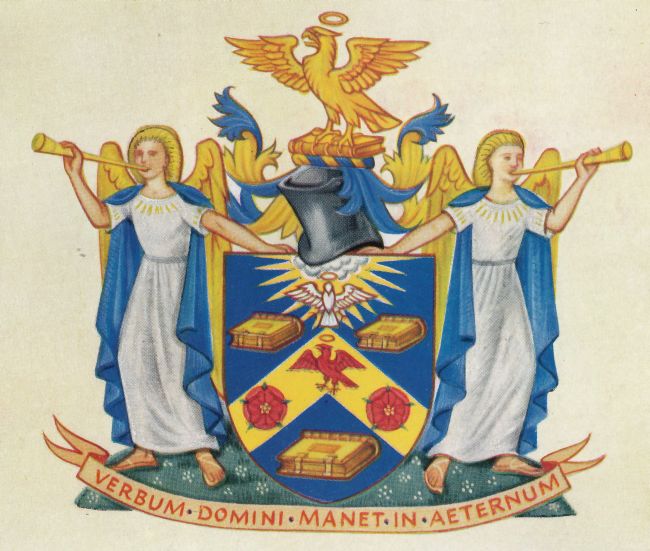 Arms : Azure, on a chevron between three books with clasps, all Or an eagle volant gules with a nimbus Or, between two roses gules leaved vert, in chief issuing out of a cloud proper radiated Or a Holy Spirit, wings displayed, argent with a nimbus Or.
Crest: On a wreath of the colours, An eagle, wings expanded, with a diadem above its head, perched on a book fessewise, all Or.
Supporters: On either side an angel proper, vested argent, mantled azure, winged and blowing a trumpet Or.
Motto: Verbum Dei manet in aetemum.

The arms were officially granted on 6 Sep­tember 1557, crest and supporters granted 30 July 1951.

As early as the thirteenth century the word "stationarius" was being used to describe a man who had a fixed place of business and for some reason became particularly attached to those who sold books and manuscripts, or the craftsmen who created the medieval book, the parchminer (supplier of parchment), the scrivener, who wrote the text, the lymner and the bookbinder.

When the writers of court hand broke away from the common guild and formed their own Worshipful Company of Scriveners, it is known that the writers of text letter did likewise, but little is known of this forerunner of the Stationers Company. Presumably it could not exist on its own for in 1403 the writers of text letter joined with the lymners, binders and booksellers, and possibly the parchminers, to form a guild - the origin of the Stationers Company. The introduction of printing was gradual - the manuscript book being sold alongside the printed book, both being illuminated and bound by the same craftsmen. The printers, at first a minority, gradually became a dominant force, and some of the booksellers became transformed into publishers.