From Heraldry of the World
Your site history : (New) Subiaco Abbey, Logan County, Arkansas
Jump to navigation Jump to search 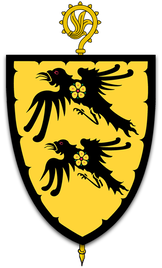 If you have any information on these arms Subiaco Abbey, Logan County, Arkansas mail us !

Literature: Abbot Lansing's Arms from No 1 Heraldic Monograph Series of the American Society of Heraldry.