From Heraldry of the World
Your site history : 106th Finance Battalion, US Army
Jump to navigation Jump to search 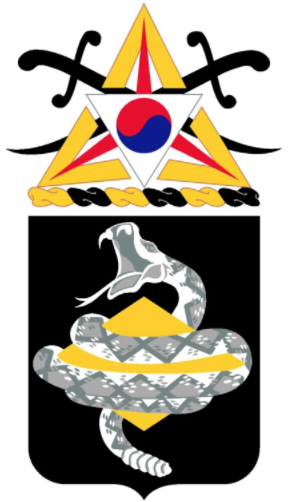 Sable, a lozenge axis horizontal Or entwined by a serpent Argent.
Crest: From a wreath Or and Sable two scimitars points down saltirewise of the like superimposed by three radiating broad arrows one point up Or, shafts Gules, and a triangle one point down Argent charged with a Taeguk.
Motto: The Diamondbacks.

Silver gray and golden yellow are the colors traditionally associated with the Finance Corps. Black denotes solvency and solidity. The lozenge is adapted from the Finance Corps insignia of Branch. The diamondback rattlesnake highlights the organization's motto. The Taeguk represents the unit's Republic of Kore Presidental Unit Citations anf the triangle symbolizes support and strength. The Three broad arrows commemorate service in World War II, the Korean War and southwest Asia. The scimitars highlight the unit's Southeast Asia compaigns. The Coat of Arms was approved on 29 April 1994.

Literature: The Insitute of Heraldry, US Army