From Heraldry of the World
Your site history : 10th Transportation Battalion, US Army
Jump to navigation Jump to search 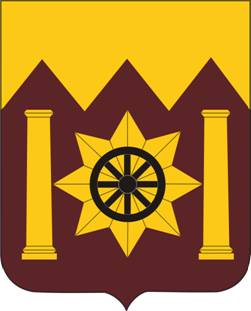 Shield: Sanguine, on a mullet of eight points (compass rose) Or, a wheel Sable between two Dorci colums of the second, a chief dancetté of the like.
Crest: none.
Motto: Portal to victory.

The wheel and compass rose symbolize the worldwide role of the Battalion. The two coloums symbolise the terminal aspect of its mission. The Coat of Arms was approved on 17 March 1993.