From Heraldry of the World
Your site history : 13th Cavalry Regiment, US Army
Jump to navigation Jump to search 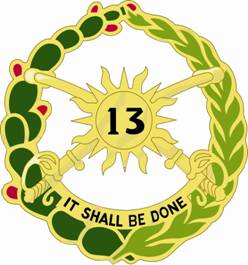 Badge : Two cavalry sabres in saltire proper. over all a sun in splendour or charged with the numerals "13" sable
On a scroll or suspended from the hilts of the sabres the motto "It Shall Be Done" sable.
All wihtin a wreath of cactus on dexter side, palm on the sinister side, proper

The 13th Cavalry Regiment has not got a Coat of Arms just a Badge. The Sun is taken from the Flag of South Dakota, where the Regiment was organized at Fort Meade in 1901. The Wreath symbolises service in the Philippines and along the Mexican Border in 1916. The Sabres indicate Cavalry and the Number the Regimental Number.

Literature: Armor-Cavalry Historical Services Division Office of the Chief of Military History, Department of the Army. Image from Wikimedia Commons.