From Heraldry of the World
Your site history : 1st Engineer Battalion, US Army
Jump to navigation Jump to search 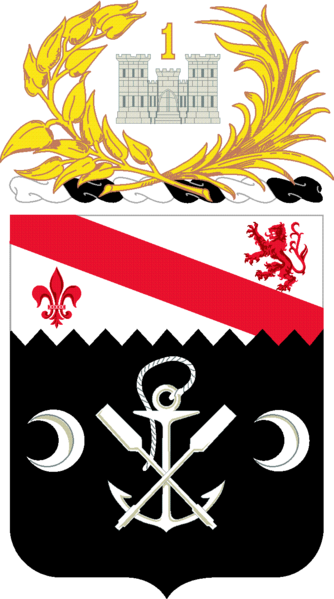 Shield: Sable, per fess an anchor bearing two oars in saltire, between two increscents all Argent. As an augmentation on a chief indented of the last a bend between a lion rampant in chief and a fleur-de-lis in base all Gules.
Crest: On a wreath of the color Argent and Sable, the officer's cap ornament of the Corps of Engineers as specified in Article 83, of the Regulations of 1841, Proper (gold wreath of laurel on dexter side, palm on sinister, enclosing a Silver turreted castle) with the numeral "1" Or above centre turret.
Motto: Always first.

The Battalion has a continuous history from 1846 when Company "A" was organized. At that time the colour of the facings of the Corps was Black, hence the Sable Field. Company "B" was organized in 1861 and both Companies served throughout the Civil War in the Army of the Potomac where they where engaged in pontoon bridge building. The Civil War service is represented by the badge of the Engineers and Pontoniers of the Army of Potomac, an anchor behinf two crossed oars in silver. The two crescents ar taken from the arms of General Winfield Scott (a silver star between two silver crescents on a bend) and show service of company A in Mexico under that General. During World War I, the Unit was cited by the French Government for actions at Menil-la-Tour, Cantingny and Soissons. The Bend on the chief is from the Arms of Lorraine, where Menil-la-Tour is located. Cantigny is located in Picardy indicated by the lion from the Arms of that Province. The Fleur-de-lis is from the Arms of Soissons. The Crest is the Officer's cap device of 1841.

Literature: Image from Wikimedia Commons. Further Information from The Institute of Heraldry, US Army.