From Heraldry of the World
Your site history : 1st Finance Battalion, US Army
Jump to navigation Jump to search 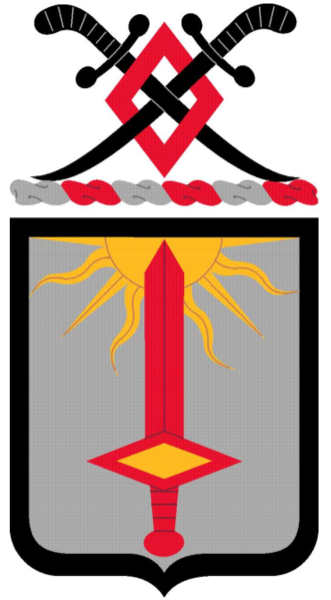 Argent (Silver Gray), a demi-sun in splendour issuant from chief, overall a sword Gules with handguard of the like voided Or, a brodure Sable.
Crest: From a wreath Argent (Silver Gray) and Gules two scimitars points down saltirewise Sable interlaced with a mascle of the second.
Motto: First Diamonds

The colours silver gray and golden yellow are traditionally associated with the Finance Corps. Red represent valour and action whiled gold is emblematic of excellence and high standards. The Sun represents the desert of Southwest Asia and the Unit's Baptism of fire. The Handguard is diamond-shaped in allusion to the Branch insignia of the Financial Corps. The Border symbolises unitya and the colour Balck denotes solvency and strength. The Scimitars in the Crest symbolises the actions in Southwest Asia and the mascle symbolises cooperation and support. The Coat of Arms was Approved 19 October 1994.