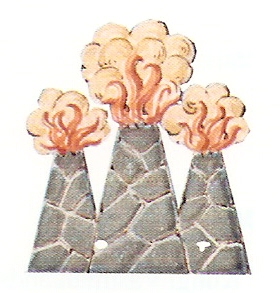 The Badge showed the three mount with flames from the Provincial Arms of Västmanland. HM King Gustaf V presented the colour to the Wing at the Gärdet in Stockholm on 16 June 1938, upon disbandment it was haded to the F16 Wing that was to keep the F1 traditions, today it is preserved at the Army Museum. On 11 December 1942 the Swedish Cabinet ordered that the Colour of the former I18 Royal Västmanland Regiment was to be used by F1 as Tradition Colour. Lieutenant-General Richard Åkerman presented the I18 Colour to the Wing.