From Heraldry of the World
Your site history : 20th Air Division, US Air Force
Jump to navigation Jump to search 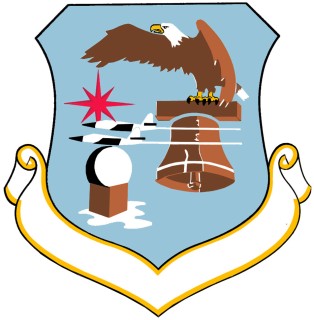 On a shield azure, an American Bald Eagle, wings surgenat tergaiant, tips to dexter, perched on the beam of the Liberty Bell all proper flanked on teh dexter with an aerial burst gules, two aircraft with jet vapor streams in flight, fesswise,a rgent, markings sable, and a radome proper, resting on a land mass argent, all in pale. Approved 20 August 1956.