From Heraldry of the World
Your site history : 22nd Strategic Aerospace Division, US Air Force
Jump to navigation Jump to search 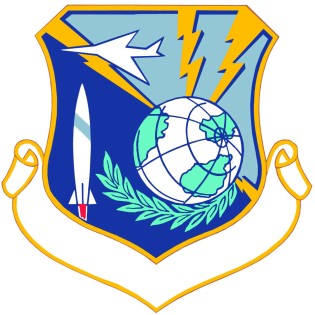 Per bend light blue and azure four lighning flashes, two in bend issuant from dexter chief and sinister base, two issuant from sinsiter all or garnished gules, overall in dexter chief an aircraft fesswise in dexter flank a missile palewise in the like emitting a vapor to base of the fourth fimbriated of the fifth, in sinister base a globe arraswise of the grid linded of the second with land areas vert an arched olive branch of the last, all within a diminished bordure of the third. Approved 6 June 1963.

If you have any information on these arms Strategic Aerospace Division, US Air Force mail us !