From Heraldry of the World
Your site history : 249th Engineer Battalion, US Army
Jump to navigation Jump to search 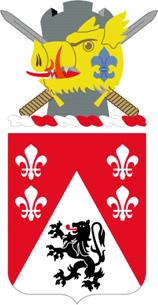 Shield: Per chevron Gules and Argent, in chief four fleurs-de-lis two and two of the second, and in base a lion rampant Sable langued of the first.
Crest: From a wreath Argent and Gules a tower Sable surmounted by two swords points up saltirewise Proper, overall a boar’s head couped Or armed and langued of the second and charged with a fleur-de-lis Azure.
Motto: BUILD, SUPPORT, SUSTAIN.

Distinctive Unit Insignia. Description: A Silver color metal and enamel device 1 1/8 inches (2.86 cm) in height consisting of a shield blazoned: Per chevron Gules and Argent, in chief four fleurs-de-lis two and two of the second, and in base a lion rampant Sable langued of the first. Attached below and to the sides of the shield is a tripartite Silver scroll inscribed “BUILD SUPPORT SUSTAIN” in Black letters.

Shield: Scarlet and white are the colors for the Corps of Engineers. The four fleurs-de-lis symbolize the battalion’s four European battle honors for service during World War II. The lion, suggested by the Belgian coat of arms, alludes to the Belgian Army citation awarded the organization.

Crest: The tower represents World War II campaigns in Central Europe and the Rhineland, and refers to the branch mission. The boar, known for its ferocity and strength, symbolizes fierce ground combat in the European theater and suggest “Prime Power,” the title which characterizes the many and varied functions of the 249th. The swords signify readiness and the importance of the individual soldier to the organization’s many programs and goals. The fleur-de-lis refers to World War II campaigns in Northern France and Ardennes-Alsace. Black, derived from the flag of Belgium, recalls the citation given the unit by the Belgian Army for action in Ardennes. Gold denotes excellence.

Literature: Image from Wikimedia Commons. Information from The Institute of Heraldry, US Army. [[Category: Granted 1955]