From Heraldry of the World
Your site history : 29th Air Division, US Air Force
Jump to navigation Jump to search 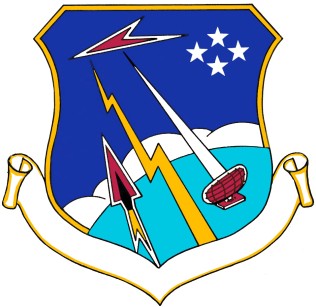 Azure, whitin a diminished bordure or, issunat from sinister base a cloud formation proper, overall superimposed on the border and issuant from sinsiter base a demi sphere with axis bendwise light blue surmounted b alightning flash of the second between a missile symbol gules and sable emitting a vapor trail of the second all fimbriated argent, and a radar screen of teh fith detailed of the sixth edged of the seventh emitting a light beam of the like all bendwise, in dexter chief an aircrat symbol of the last voided of the fifth and in sinister chief four mullets one, two and one of the seventh. Approved 27 November 1961