From Heraldry of the World
Your site history : 3rd Wing, US Air Force
Jump to navigation Jump to search 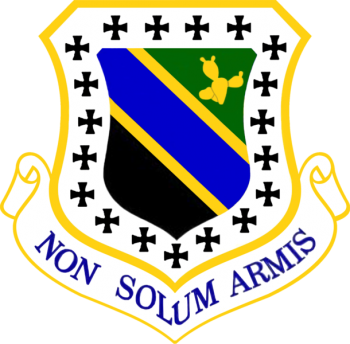 Party per bend vert and sable in chief a cactus (prickly pear) or, a bend azure fimbriated of the third, all within a bordure argent charged with nineteen crosses patee of the second.

The shield is divided diagonally into the original colors of the Air Service, green and black. Over the dividing line is a band of the Air Force’s, present colors, ultramarine blue and golden yellow representative of the Rio Grande River dividing the US and Mexico. On the green field is a yellow cactus commemorating the group’s first patrols along the Mexican border. Around the shield is a white border with black German crosses equal to the number of aerial victories credited to the Group’s original squadrons during the Great War (World War I).