From Heraldry of the World
Your site history : 421st Medical Battalion, US Army
Jump to navigation Jump to search 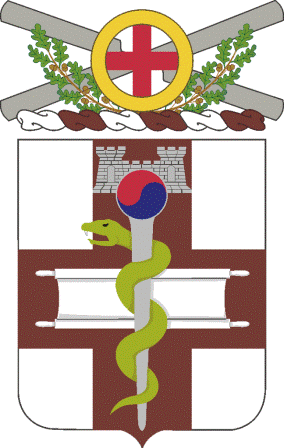 Shield: Argent, a cross Sanguine (Maroon) surmounted in chief by a stylized castle Argent (Silver Gray), above a stretcher fesswise of the first, overall a staff of the third, bearing a taeguk entwined by a serpent Vert.
Crest: From a wreath Argent and Sanguine, four helicopter blades saltirewise Argent (Silver Gray) surmounted by an annulet Or charged with a cross Gules between a wreath of oak Proper.
Motto: Anyone, anywhere, anytime.

Distinctive Unit Insignia. Description: A silver color metal and enamel device 1 1/8 inches (2.86 cm) in height overall, consisting of a maroon cross bearing a horizontal silver stretcher superimposed by a silver staff entwined by a green serpent and terminating with a stylized silver castle bearing a taeguk, all enclosed on either side and at bottom by a maroon tripartite scroll inscribed "ANYONE ANYWHERE ANYTIME" in silver letters.

Shield: The colors maroon and white (silver) are those traditionally associated with the Army Medical Department. Green denotes hope and good health. The maroon cross reflects medicine, courage and zeal. The staff and serpent are adapted from the staff of Aesculapius, the mythological God of Medicine, and represent life-giving powers. The stylized castle and taeguk refer to the unit's decoration and campaign credits received for service in the European Theater and Republic of Korea. Crest: The helicopter blades reflect the unit's mission of airmobile evacuation. The cross is the traditional symbol for medical assistance. Red denotes bravery and valor. The gold ring refers to the continuous medical support provided by the battalion. The ring and cross symbolize a wheel; this combination alludes to movement and the unit's ground ambulance support. It also highlights the Meritorious Unit Commendation awarded for service in the European Theater. The wreath of oak signifies regeneration, health and the unit's campaign decoration for service in Korea.