From Heraldry of the World
Your site history : 60th Air Defense Artillery Regiment, US Army
Jump to navigation Jump to search 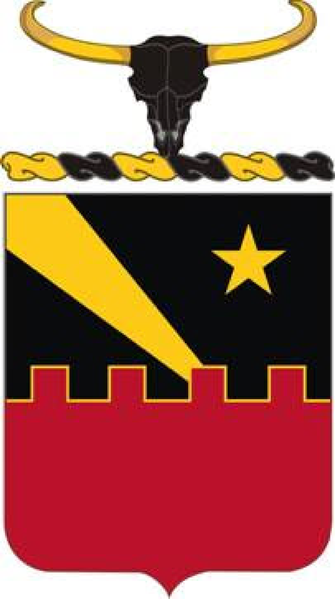 Shield: Per fess embattled Sable and Gules fimbriated Or a pile in bend of the third the lower portion obscured by the second tincture, in sinister chief a mullet of the third.
Crest: On a wreath of the colors Or and Sable a carabao skull Sable horned Or.
Motto: COELIS IMPERAMUS (We Rule The Heavens).

The shield is divided horizontally into two parts, the dividing line being embattled to represent defense. The lower half is red for Artillery; the upper half bears the colors of black and gold, significant of the Orient where the unit had its pioneer service. A searchlight beam pierces the darkness of this portion of the shield signifying the never ending vigilance which this organization exercises in searching for enemy aircraft. The star has a double significance. It is symbolic of the state of Texas, the Lone Star State, where the unit was reorganized after World War I, and its battleground in the heavens. Crest: The carabao horns are symbolic of service in the Philippine Islands where the 60th Battalion, Coast Artillery Corps served.