From Heraldry of the World
Your site history : 802nd Air Division, US Air Force
Jump to navigation Jump to search 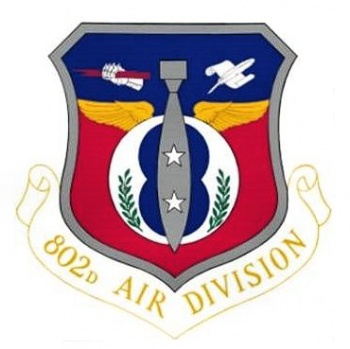 Per fess reverse arched and enhanced azure and gules, on a plate winged to chief or two huerts conjoined between two olive branches vert, in pale overall a falling bomb gray tarnished with two mullets palewise argent chief in dexter a dexter mailed hand of the last grasping a lightning flash fesswise of the second and in sinister chief a scroll surmounted by a quill pen saltirewise of the sixth all within a diminished border of the fifth. Approved in 1954.