From Heraldry of the World
Your site history : 9th Signal Battalion, US Army
Jump to navigation Jump to search 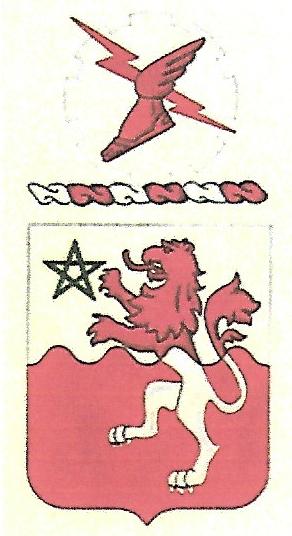 Shield: Per fess wavy argent asnd tenné a lion rampant counterchanged, in dexter chief a mullet interlaced vert.
Crest: On a wreath of the colors (argent and tenne) a plate embattled bearing a lightning bolt bendwise, overall, surmoutned in saltire by a winged foot tenné
Motto: With speed and certainey

The Colours are those of the Signal Corps. The Lion indicates the Two Belgian Army Citations. The Placement of the Lion over the Wavy line symbolises the Unit's Action at Ludendorff Bridge. The Green Star symbolises service in North Africa during World War II. The Crest is adapted from the Badge of the 9th Signal Company, and symbolises swift communications. The Battlement symbolises the Eight World War II Campaigns.

Literature: Image and Information from https://picryl.com