From Heraldry of the World
Your site history : Abbey National Building Society
Jump to navigation Jump to search 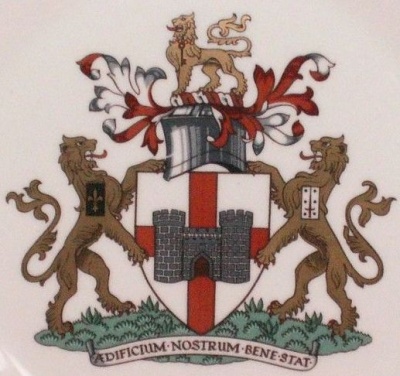 Arms: Argent, a cross gules; over all a castle sable.
Crest: On a wreath of the colours, A lion statant Or gorged with a chain, hanging therefrom a key, wards to the sinister, gules
Supporters: On either side a lion Or charged on the shoulder with a billet, that on the dexter sable with a fleur-de-lis Or, that on the sinister ermine with a sword erect gules.
Motto: Aedificium nostrum benestat.

If you have any information on these arms National Building Society mail us !