From Heraldry of the World
Your site history : Aberconwy
Jump to navigation Jump to search 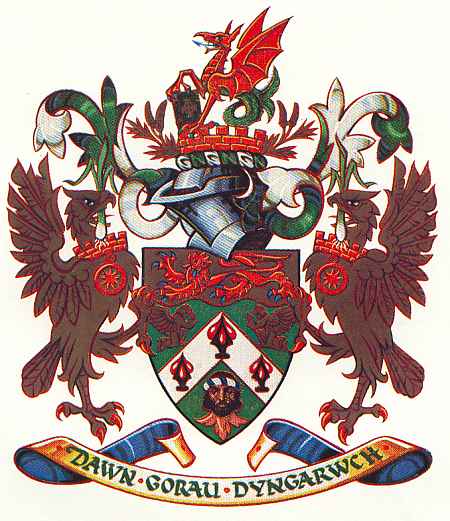 Arms: Vert on a Chevron Argent between in chief two Angels kneeling in prayer respectant Or and in base a Saracen's Head erased affrontee proper wreathed about the temples Argent and Azure three Spearheads Sable embrued proper on a Chief wavy Or a Lion passant guardant Gules.
Crest: On a Wreath of the Colours between two Sprigs of the Genista Plant Or a Mural Crown thereon a Sea Dragon sejant Gules the tail proper resting the dexter foot on a closed Book Sable garnished clasped and charged with a Celtic Cross Or.
Supporters: On either side an Eagle wings expanded and addorsed Or gorged with a Mural Crown pendent therefrom an Annulet enclosing a Mullet of nine points Gules and holding in the beak a Leek erect proper.
Motto: 'DAWN GORAU DYNGARWCH' - The greatest virtue is philanthropy.

The shield illustrates the topography and history of the district through the traditional heraldry of the tribal chiefs whose territories largely covered the Borough's area.

The green background and wave denote the Conwy valley. The angels are for Maeloc Crwm (Llechwedd and Creuddyn), the spearheads for Nefydd Hardd (Nant Conwy), the Saracen's head for Marchudd ap Cynan (Rhos and Abergele), and the lion for the Princes of Gwynedd, Dafydd and llywelyn the Great (Betws y Coed).

In the crest the mural crown suggesting the castle of Conwy is flanked by two sprigs of the Plantagenet broom badge of its builder, Edward I. The sea dragon from the Gwynedd County arms supports a Bible charged with a Celtic cross to mark the emergence in this area of the first Welsh Bible. The supporters are golden eagles from the arms of the Kings of Gwynedd, indicating the mountain areas and wear mural crowns symbolising the mountain strongholds. They hold Welsh leeks in their beaks and from each crown hangs a nine-pointed star within a ring to represent the nine former authorities combined in Aberconwy.

The motto "Dawn gorau dyngarwch" can be translated as "The greatest virtue is philanthropy".