From Heraldry of the World
Your site history : Aberystwyth Borough
Jump to navigation Jump to search 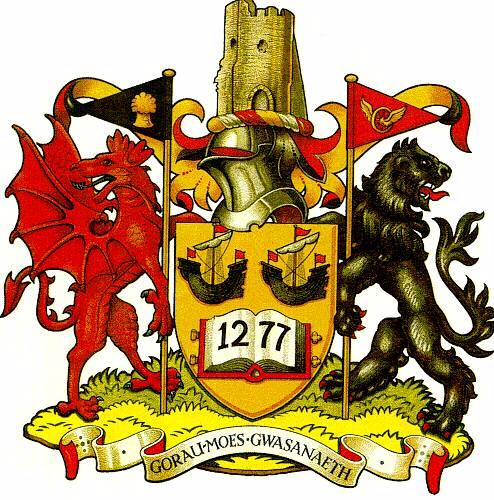 Arms: Or in chief two Lymphads Sable sails furled Argent flags and pennons flying to the sinister Gules and in base an open Book proper bound also Gules and clasped Gold inscribed on the pages with the Arabic numerals 1277 fessewise also Sable.
Crest: On a Wreath Or Sable and Gules a representation of the Castle Tower at Aberystwyth proper; Mantled Gules Sable and Or.
Supporters: On the dexter side a Dragon reguardant Gules supporting a Staff Or flying therefrom a Pennon Sable charged with a Garb Gold and on the sinister side a Lion reguardant Sable supporting a like Staff flying therefrom a Pennon Gules charged with a winged Wheel Or.
Motto: 'GORAU MOES GWASANAETH' - The best way of life is service.

The heraldic ships record Aberystwyth's past importance as a port and ship building industry. The open book represents academic aspects in the town's life as represented by the University College of Wales and the National Library of Wales. The date 1277 is the date of the original Charter granted by Edward 1.

The crest is Aberystwyth Castle Tower.

The dexter supporter is the red dragon of Wales, supporting a pennon charged with a wheatsheaf signifying the importance of the town as a market centre and it's dependence on the agricultural hinterland. The sinister supporter is a black lion, taken from the arms of the Pryse family of Gogerddan, near Aberystwyth, who played an important part in the life of the town and county of Cardigan. He supports a pennon charged with a winged wheel as a heraldic symbol for tourism, which indicates the importance of the tourist trade to the town.

The motto means The Best Way of Life is Service.

Prior to 1961 Aberystwyth did not have a coat of arms. The local seal showed a lion reguardant (looking backwards), and around 1905 the arms were shown with only the tower, see below: