From Heraldry of the World
Your site history : Acton > Special:AllPages > Acton Technical College
Jump to navigation Jump to search 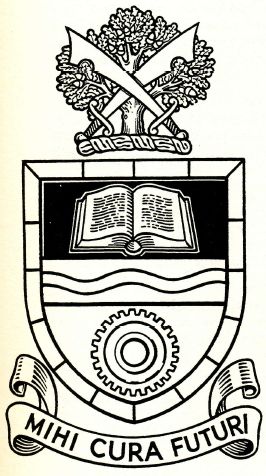 Arms : Per fesse sable and Or, on a fesse argent between in chief an open book proper and in base a gear-wheel of twenty-five teeth of the first, a barrulet wavy azure [all within a bordure compony Or and sable]
Crest: On a wreath of the colours, In front of an oak tree fructed proper, two seaxes in saltire, points upwards, argent, hilted and pommelled Or.
Motto: Mihi cura futuri.

If you have any information on these arms Technical College mail us !