From Heraldry of the World
Your site history : Adam K. Wood
Jump to navigation Jump to search 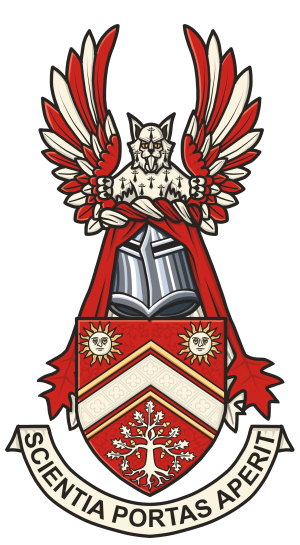 Arms: Gules, between in chief two suns in splendour Argent orbed and figured Or, and in base an oak tree eradicated Argent fructed Or, a Chevron Argent cotised Or.

The symbolism for these arms is as manifold as possible, with each element having been chosen for as many personal and aesthetic reasons as could reasonably be crammed into the reasoning. The colors, red and silver, are those of the armiger's high school, and as a graduate thereof from an unincorporated census-designated place, the closest thing to an identifying banner of their home. The armiger is also a fan of the combination as red and gold, which is commonly seen in most modern medieval-themed media, and red and silver strike them as more distinct. What little gold is present serves to accentuate the designs and lend definition to draw the eye.

The chevron is a favorite ordinary of the armiger for its overall look and its translated meaning, as the rafters of a roof are often associated with strength and stability, which they aim to achieve. The arrangement of three charges around an ordinary, particularly a chevron, is an aesthetic favorite of theirs as well, as it lends a layer of complexity without being too busy.

The main charge, an oak tree, is a fairly obvious cant on the armiger's name. Additionally, it symbolizes the local geography of the Washington DC area, specifically the hilly forests of oak and similar trees on the Virginia side of the Potomac River. It is shown in the official emblazon as having the pointed, rather than rounded, leaves of a red oak, the predominant type of oak in their native region.

The suns in their splendour are representative of the Sun of May, featured on the flag of Uruguay, from where some of the armiger's ancestors hail, and which as a charge is identical in structure to a sun in splendour.