From Heraldry of the World
Your site history : Adelberg
Jump to navigation Jump to search 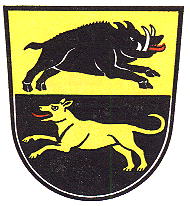 The arms were officially granted on April 7, 1959.

The arms show a wild boar, derived from the monastery of Adelberg, together with a dog, as a canting symbol of Hundsholz.

The municipality was named Hundsholz until 1851, when it took the name of the monastery, Adelberg. Before 1527 the seal of Hundsholz showed a single A. The A stood for the Adelberg monastery who at the time ruled the whole area. After the Reformation, from 1553-1800 the seals showed a canting picture, a dog (Hund) between two trees (Holz=wood). In 1930 the municipality used a new seal with two small shields under a crosier and mitre. The two shields were the boar of the monastery and the old Hundsholz arms. In 1946 this composition was replaced by the above arms. The colours were taken from the arms of Württemberg.