From Heraldry of the World
Your site history : Aeroplane and Armament Experimental Establishment
Jump to navigation Jump to search 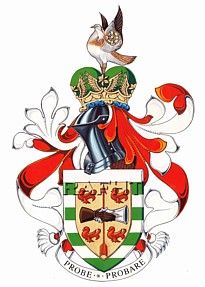 Arms : Or quarterly between in front of an Arrow in pale point upwards Gules and Airman’s Leather Glove proper grasping a Gauntlet Argent in fess four Martlets Gules all within a bordure barry of eight Argent and Vert.
Crest: On a Wreath of the colours Or and Azure (1&2, 1&2) an Astral Crown Or arising there-from between two demi-Globes Vert a Great Bustard proper charged on the wing with the Boss of a Horse’s Bit Or.
Motto: Probe Probare

The arms were officially granted in 1971.

The main element of the arms reflect the badge awarded to the unit in 1939. The border of green & white bars are from the Arms of Wiltshire which reflect the unit’s origin as part of the CFS at Upavon in 1914 and location at Boscombe Down since 1939.

The arrow, representing true flight with the airman’s glove and gauntlet symbolise aeroplanes and armament.

The martlets indicate the unit’s location at Martlesham Heath in Suffolk from 1917-1939.

Dominating the crest is the Great Bustard, once Britain’s largest native bird which last roamed wild on Salisbury Plain towards the end of the 19th century and also appears on the Arms of Wiltshire. The device on the bird’s wing is the boss from a horse’s bit and the bird is rising from a valley or ‘combe’ in a ‘down’, the name given to the chalk uplands above or between river valleys.