From Heraldry of the World
Your site history : Air Defense School, US Army
Jump to navigation Jump to search 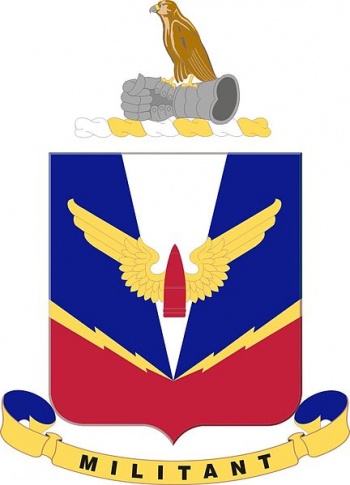 Shield: Per chevron reversed and debased Azure and Gules, two electrical flashes on partition line Or, on the first a pile throughout Argent, surmounted by a shell of the second, winged of the third. Crest: On a wreath of the colors (Argent and Azure) a clenched dexter gauntlet fesswise a falcon perched Proper. Motto: Militant.

The escutcheon represents the coordinated activity of the different elements of the Antiaircraft Artillery. The base of red is the Artillery color. The thunderbolts indicate the employment of electrical power. A searchlight beam pierces the night sky of blue. In the shaft of light rises a winged projectile, flying swiftly and surely to its target. The thunderbolts are power; the shaft of light, the illustration of truth through knowledge; the sky, the illimitable regions of the upper air that Antiaircraft Artillery must conquer; the winged projectile, the spirit of the School, young, rising, indomitable.