From Heraldry of the World
Your site history : Akashdip Maity
Jump to navigation Jump to search 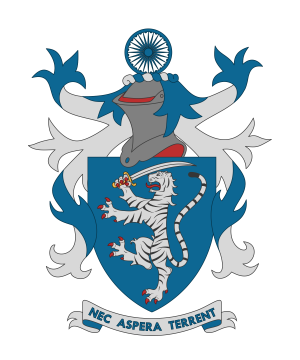 Crest: Upon a helm mantled Azure doubled Argent, on a wreath of these tinctures, an Ashoka Chakra Azure.

The Bengal tiger represents strength and fierceness. It is also a symbol of Bengal, the state from where the armiger hails. The Ashoka Chakra celebrates the armiger's Indian heritage and is a representation of the Dharmachakra, a very important symbol in Hinduism, Jainism and Buddhism.