From Heraldry of the World
Your site history : Albany Academies (Albany, NY)
Jump to navigation Jump to search 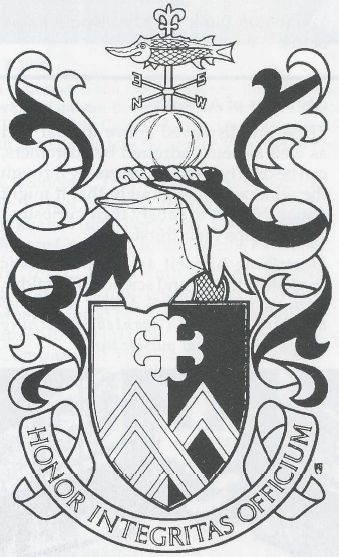 The arms were officially designed in 1996.

The design draws on historic and symbolic elements of the Academy's history, and their colours red and black are used for the field, with gold for honour.

The interlaced chevronels suggest the letters'AA' and symbolise the intellectual and spiritual aims of the Academy. The Cross Moline is taken from the Arms of the Van Rensselaer family. Blue and orange (Tenne) are the colours of the City of Albany.

The rather unusual crest of a pumpkin and a fish weathervane is an interpretation of the weathervane atop the cupola of the'New School'building. The weathervane came to the school through the agency of Marcus Reynolds the architect, who persuaded the Trustees of the Second Presbyterian Church in Albany to transfer it to the school when the church was being remodelled in 1921.
The actual fish on the vane is thought to be a Cod or a Sturgeon but, as represented in the crest, it is more like an heraldic Dolphin.

The motto Honor Integritas Officium (Honour Integrity, Serviie) were chosen by the 20th, Head of School Lawrence Piatelli, as emblematic of an academic education.