From Heraldry of the World
Your site history : Albert College
Jump to navigation Jump to search 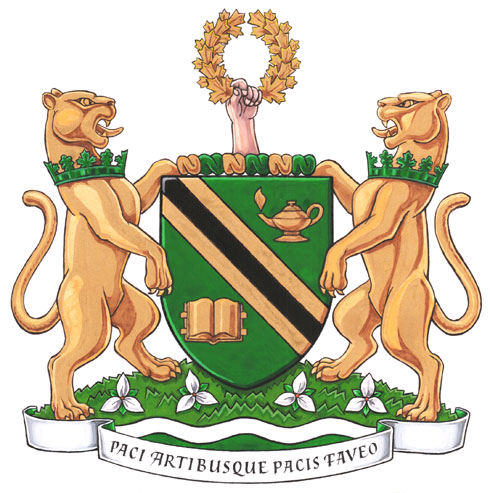 Arms : Vert on a bend between in chief a lamp enflamed and in base an open book Or, a bendlet Sab
Crest : A sinister cubit arm proper the hand grasping a wreath of maple leaves Or
Supporters : Two panthers Or each gorged with a Loyalist civil coronet Vert, standing on a grassy mount set with trillium flowers proper above barry wavy Argent and Vert
Motto: PACI ARTIBUSQUE PACIS FAVEO

Thesarms have been in use since 1866 when the institution was renamed in honour of Prince Albert, The Prince Consort. The yellow and black stripes are likely based on the arms of Saxony, as borne by the prince. The lamp and book symbolize knowledge and learning.

The wreath, proudly held by an outstretched arm, is a symbol of achievement.

The panther is the College’s long-standing mascot. The coronets honour the Loyalist roots of Belleville, where the school is located. The grass and wavy stripes represent the shores and waters of the nearby Bay of Quinte. The trillium is the official flower of Ontario.

The motto means “I favour peace and the arts of peace”.