From Heraldry of the World
Your site history : Alberta
Jump to navigation Jump to search 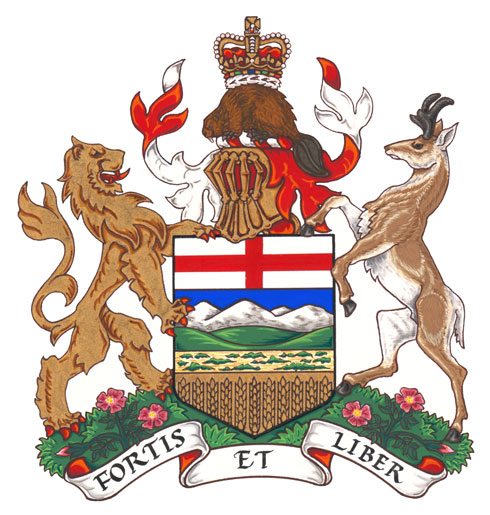 Arms : Azure in front of snowy mountains a range of grassy hills proper, in base a wheat-field Or surmounted by a prairie proper, on a chief Argent a cross Gules;
Crest : A beaver couchant upholding on its back the Royal Crown proper;
Supporters : Dexter a lion Or, sinister a pronghorn antelope (Antilocapra americana) both standing on a grassy mount set with wild roses (Rosa acicularis) proper;
Motto: FORTIS ET LIBER;

The red St. George’s cross on a white background is an allusion to the arms of the Hudson’s Bay Company, which once controlled what is now Alberta, as well as to the English origin of the Company. The snow-capped mountains allude to the Rocky Mountains and the green hills to the foothills. The grass prairies and the wheat field refer to agriculture.

The beaver is the official animal of Canada, being a symbol of the fur trade that led to the major exploration by Europeans. The Royal Crown indicates that these are the Arms of the Sovereign in Right of the Province of Alberta.

The lion is a royal symbol, and the pronghorn antelope is native to Alberta. The wild rose is the official flower of Alberta.

The motto means “Strong and free”.