From Heraldry of the World
Your site history : Aldo Lazuardy
Jump to navigation Jump to search 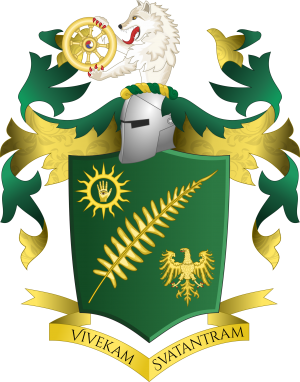 Vert; a fern Or in bend sinister; in chief dexter, a hand Or charged with an eye proper within a sun voided; in sinister base, an eagle Or, armed and langued gules

The green field symbolises the bearer's love of nature and alludes his origin; Indonesia is poetically described as the "Emerald of the Equator". Fern is the bearer's favourite plant, and during Victorian era, it serves as the symbol of sincerity and humility; qualities that the bearer favours and strives to achieve.

In dexter chief, an eye on a hand surrounded by sun rays is taken from the bearer's paternal family coat of arms. It represents the family's common ancestor who, according to family lore, became a nobleman due to his possession of supernatural powers and clairvoyance. In base sinister, an eagle Or, taken from the bearer's maternal family coat of arms, blazoned "Vert, an eagle Or, charged with Crux constellation gules, langued and armed gules, holding a sword in dexter and a laurel wreath in sinister." The coat of arms as a whole symbolises the bearer's grandparent's Betawi heritage and service in the Indonesian Armed Forces. The bearer chose not to inherit and assume the arms of either side of the family due to his philosophy.

The crest features a wolf, the bearer's favourite animal and the symbol of his introversion. The wolf is holding the Dharma wheel, representing Buddhism; a philosophy that the bearer attempts to follow. The philosophy also inspires the motto; the bearer hopes it leads him on a path "to wisdom"-that is, the realisation of the true nature of reality-"and freedom" from suffering.