From Heraldry of the World
Your site history : Alexandru Drăghici
Jump to navigation Jump to search 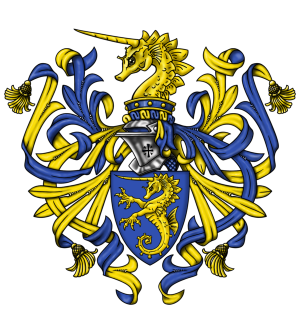 Azure, a sea-unicorn Or rampant hauriant. Mantling Azure doubled Or. For a Crest, emerging from a circlet Azure, fimbrated, charged with eight pearls, only five showing, a sea-unicorn's head Or.

The arms are meant to symbolize the armiger's deep connection to the sea while the sea unicorn combines the grace and nobility of horses with the mythology of occult arts. The circlet is supposed to invoke a sense of nobility and high standards.