From Heraldry of the World
Your site history : Algonquin College of Applied Arts and Technology
Jump to navigation Jump to search 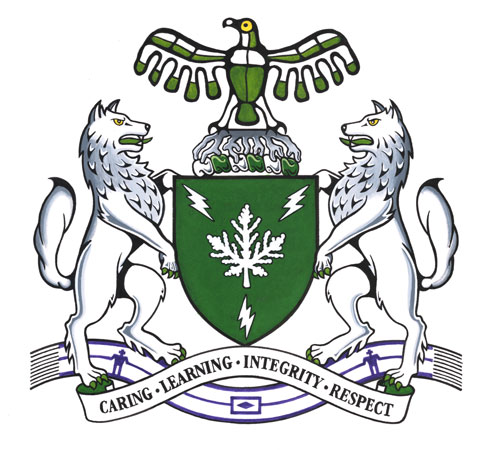 Green and white, and the lightning bolt, have long been the colours and symbol of Algonquin College. Lightning, a dramatic natural phenomenon, symbolizes the spark of inspiration, as well as innovation and transformation. The sprig of white cedar, a hardy tree native to northeastern North America, represents the richness of nature as well as its medicinal and utilitarian properties. As an evergreen, it is also a symbol of resilience and longevity; moreover, the College’s first emblem included an evergreen tree in reference to the logging history of the Ottawa Valley.

The thunderbird, able to cause thunderstorms and lightning by a flap of its wings, commemorates the fact that the College was established on Algonquin land. A benevolent spirit and a source of wisdom, it represents Algonquin College’s quest to create and share knowledge. The twisted roots on which it stands reinforce the image of the thunderbird as a protector of humankind. They also refer to the roots of learning for the College’s students.

The wolf symbolizes leadership. The wampum, interlaced with the motto scroll, was offered in 2017 to Algonquin College by its students. It represents the College’s past and future, a shared understanding and direction, and the idea of working together to care for students, faculty and staff.